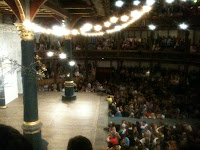 She may not have given Henry VIII the male heir he thought so important but, apart from giving birth to arguably the most successful monarch of the 16th century, Anne Boleyn was undoubtedly the inspiration for the Church of England’s break with Rome and development as an independent tradition in Christianity. Queen for less than three years, her impact in these two respects clearly marks her as a figure of towering importance in English history.

It is this image that Howard Brenton promotes in Anne Boleyn, currently playing at Shakespeare’s Globe. Coquettish and manipulative she remains, as more usually presented. But Brenton gives greater credence to Anne’s admiration for William Tyndale and her desire for a reformed religion as evidence of a genuine protestant idealism, not merely convenient excuses to get rid of the King’s first wife.

The Tyndale inspiration is reinforced by the appearance of James I, who came to the English throne 67 years after Anne was executed. Anne and her fate loom large in James’s mind as he grapples with continuing religious strife, successfully forcing the principal traditions to tolerate one another; the King James Bible he commissioned was based in large part on Tyndale’s earlier translation.

The performance, to a packed house on a grey but dry evening, was warmly received from start to finish, the company chatting with audience members and moving about the auditorium without ever breaking the spell of the play. Miranda Raison captured the vulnerability and playfulness of Anne and John Dougall ably portrayed the ruthlessness and cleverness of Thomas Cromwell. Anthony Howell’s Henry showed the youth and attraction he still had at that time - but the playwright’s portrayal of the king as a weak-willed follower rather than an obsessive driver does not do justice to the historical record. It is however a relatively minor quibble with a play whose essential truth deserves to be heard.

The star of the play, though, is undoubtedly James Garnon, whose King James has all the charisma Henry so implausibly lacks. His tics and spasms might have challenged in another actor, but Garner’s presentation of the king chasing male courtiers and outwitting his counsellors was funny, believable and historically consistent.

The journey from Henry’s divorce to James’s Bible - still in use today - reminds us how our culture and traditions have in large measure been shaped by the influence of Anne Boleyn: perhaps enough for her to become the “evergreen female icon” that the Globe’s Artistic Director Dominic Dromgoole claims her already to be in his programme notes.